The tangled mess of mistaken notions about the doctrine of divorce is truly a gigantic knot. It takes a lot of untying to get it correct. And most professing Christians, in my observation, are still carrying around at least one but probably several false notions about divorce doctrine.

The false notions prop each other up like a house of cards.

Did you ever build a house of playing cards when you were young? If so, you will remember how devastating it was when one card fell sideways and the whole house toppled. Few people like to sit with the discomfort of disentangling all the false notions about divorce. To disentangle the false notions you have about what the Bible says about divorce, you have to be willing to tolerate and sit with that feeling of devastation.

Then you have to be willing to rebuild the house so it won’t fall over: so that every card, every cord, every passage on divorce in the Bible, fits together and stands up and harmonises. So that no passage is over-emphasised at the expense of other passages. If you build a house like that, it can’t be toppled.  It has good foundations. And every connection between the parts of the house is sturdy.

But sitting with the feeling of devastation that you’ve held mistaken ideas is not the only difficulty. You know how electric cords persist in bending and twisting the way you don’t want them to bend and twist? With all the mistaken notions about divorce, you can disentangle one cord of the knot and start working on another cord, but the first cord you disentangled bends back and inserts itself into the knot again! Aarrgh! 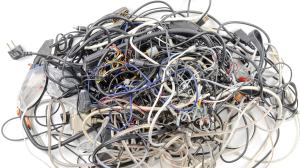 What makes an interpretation worthy?
What are the criteria for figuring out a sound doctrine of divorce?

If an interpretation is worthy, it must harmonise all the Scriptural precepts and passages about divorce. It must also harmonise with the characteristics of God: his wrath for sinners, especially willful intentional sinners; his compassion for those sinned against; his desire to protect his church/bride from wolves in sheep’s clothing; and his command that the People of God must pay especial attention to not oppressing women who are bereft of husbands and children who are fatherless.

Children who grow up in a home where one parent is abusing the other parent are inevitably hurt and harmed by that, because the abuser is modelling evildoing and selfishness to the children. Often the children are frightened and terrified. When it comes to kids being damaged, far more damage is caused by the abuser than by a divorce which may ensue from the abuse.
(Helpful page from our FAQs: For my children’s sake, it is better to leave?)

In the rest of this series, some of my arguments will seem fairly intricate. I apologise in advance, but I ask you to bear with the intricacies and take your time evaluating and absorbing them. My arguments only have to be intricate because the multiple misunderstandings of the scriptures relating to divorce have been so convoluted, so inter-woven, so multi-layered…not to mention the fact that many of them had been traditionally accepted and passed down for millennia.

These misunderstandings are like one of those complicated wooden puzzles that test your IQ. Disassembling all the misunderstandings of the scriptural passages on divorce, and then working out where the pieces must correctly go to fit the whole counsel of God, requires brainwork!

Part 2: The Bible uses different words for divorce but they all mean legal divorce. Those who tell you otherwise are mistaken.

Part 3: Jesus did NOT say “Hardness of heart is grounds for divorce”. Deuteronomy 24 has been greatly misunderstood.

Part 4: The Jewish divorce certificate gave women the right to remarry, but some men use it to rule over women

Part 5: Does Scripture differentiate between ‘putting away’ and ‘divorce’?

Part 6: Divorce in Deuteronomy 21 gives dignity and rights to the woman

What does the Bible say about divorce? (one of our FAQs)

How can I help my children heal from abuse? (another of our FAQs)

My book Not Under Bondage: Biblical Divorce for Abuse, Adultery and Desertion

Abuse and Decision-Making: Are Our Traditional Methods of Discovering God’s Will Really Biblical?