Jay Adams taught counselors to side with male abusers and against female victims.

[June 7, 2022: There have been some changes made to this post. For more information, read the Editors’ notes at the bottom of the post. Editors.]

Misogynistic bias is a real thing, and it is very obvious here. Painfully obvious. 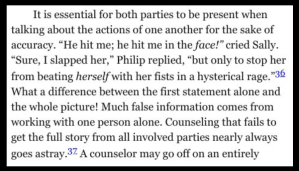 from “The Christian Counselor’s Manual” by Jay E Adams

Jay Adams is TEACHING counselors to side with male abusers and against female victims. He is TEACHING them to overlook crimes.

So, if you have ever been in nouthetic counseling or “biblical” counseling and have been told that the problem is not that you are being abused, but that you are not dealing with it in a “Christian” (cheerful, pliant, uncomplaining, and pacifistic) manner, just know this: That was by the book.

And this book is STILL being used as a seminary textbook.

“A companion and sequel volume to ‘Competent to Counsel’, this volume includes indexes, a detailed table of contents, and many diagrams and forms, all of which make this one of the best reference books for Christian counselors.” — thomasnelson.com, current book summary
[The Thomas Nelson link is broken and we were unable to find the listing for The Christian Counselor’s Manual on the Thomas Nelson website or in the Internet Archive for Thomas Nelson. We found the same book summary on the Zondervan website. Editors.]

Used in many churches, taught in many seminaries, believed and supported by many.

We should weep and mourn. We should ask our pastors and Elders if they are relying on this material to counsel people.

We should write to our denominational seminaries and ask if these books are still being used. My heart hurts, and I have read all I can for now.

“The Christian Counselor’s Manual” was published in 1986. That is 33 years ago. It is reprehensible that it is still being recommended by seminaries!

I urge all our readers to call on church leaders and Christian organisations to say whether they are endorsing this book. And if they are endorsing it, demand they stop! Call on them to publicly denounce this book for the horrible misogynistic advice it gives.

Shattering Words and Crying to God — by Ps Sam Powell

Whose tears are covering the altar in Malachi 2? The Matthew Bible vs. the Geneva Bible, Puritans and Calvin — by Barbara Roberts