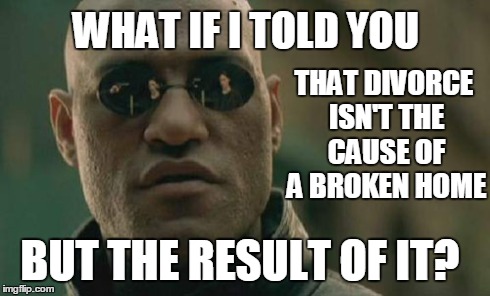 Divorce often occurs when targets of abuse (with their children) LEAVE the “broken home.” A “broken home” in which they have bravely STAYED, with passionate hope for healing – for way too long!! A “broken home” which is making the targets ill, mentally fragmented and soulfully crushed. Once they leave and begin to recover and heal…the home is ~no longer broken~… it is in God’s hands and the home is experiencing restoration and healing. The targets might always, always love, miss and pray for the “person” they needed to leave. But it is good that they decided they would no longer endure something that was killing and robbing them every single day.

Stop telling a target of abuse that her children are destined to be a statistic of “ruined children in broken homes because of divorce” because she’s chosen to leave and raise them in a “broken home.” No!! She  l-e-f-t  the “broken home”… and is building a NEW HOME. A home with life and healing, joy and fresh air, new beginnings and good things!!! Her children get to find out what an amazing father God is… and the woman gets to discover what an incredible husband He is. They get to finally be a REAL HOME.

I have heard it suggested (and my believing this is one reason #whyIstayed) that divorcing an abuser is like jumping from the frying pan into the fire. The frying pan scenario is the result of a false dichotomy fallacy. It assumes there are only two choices, the devil you know, or the devil you don’t. It’s like Debi Pearl asserting in Created to be His Help Meet that divorce results in living in a shabby duplex. What if the target of abuse gets good counselling, therapy, help, and hope? What if she isn’t the cause of the abuse? What if she learns to spot the red flags of abusers and stays away from them?

Concerning the statistics that paint a drab picture for the children of divorced parents:

The statistics are skewed and designed to make divorce the bad thing, not the evidence of it. They present numbers that claim that divorce causes kids to grow up in poverty. No, the deadbeat parent’s lack of provision causes that. Deadbeat dads were already not providing and the moms were covering it up because that’s what a Proverbs 31 wife does, right? But it’s easier to measure divorced deadbeats than married ones whose refusal to provide (making him worse than an infidel, BTW) was hidden by a “submissive” wife’s trying to make stone soup last a month.

Divorce doesn’t prevent a father from providing. It often just reveals the fact that he never did. Not all abusers utilize financial abuse, it’s just the one thing the statistics focus on because it’s easily measured. But even then, divorce is painted as the culprit instead of the one who is “worse than an infidel.” There’s nothing preventing a parent from providing MORE than what the courts mandate. I know of fathers who have/do. The problem isn’t the divorce. Divorce calls attention to the problem.

Eliminating divorce doesn’t eliminate the problem any more than removing the batteries from a smoke detector, thus silencing the warning signal, puts out a fire.