4. Chris Moles heard the women’s stories. What has he done with them? 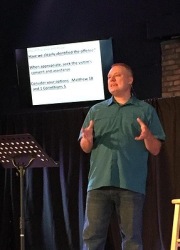 I believe Chris Moles walks the fence and curries popularity by not sternly admonishing church leaders for how they often mishandle domestic abuse.

In his book, Chris Moles recounts how he was invited to speak to a group of Christian women who had questions that their women’s advocate was not equipped to answer:

This was my first experience of ministering to a group serving victims.

… The small house appeared abandoned with overgrown lawn, drawn blinds, and no signs of life. … it served as a branch office of the local shelter. It was an out of the way undisclosed location where workers offered various services to victims of domestic violence. …

What struck me about that meeting were the stories of abuse. Those women had not endured a single abusive event, they had lived through decades of abusive, controlling and violent behavior. But that was not the only thing they had in common. The majority of the women in the room were now either being disciplined or shunned by their own church. The stories were nearly identical as they told of asking their pastor for help, attempting counseling, seeing their husband supported, and eventually – the tables turned on them.

Over half the women in this group were separated from their home church for filing for divorce after the abuse returned, while the husband remained in the church and one continued to serve in a leadership position. This is one small group, in one small town, in one state. In fact, stories such as these can be found throughout the country, as abusive people use the Bible, doctrinal positions, and church authority as means of controlling their partners. Many have begun describing this as spiritual abuse.
(“The Heart of Domestic Abuse”  p 77. This book is item M in my list of citations at the Chris Moles Digest)

His failure to take a stand there is typical of how he walks the fence when it comes to admonishing churches for how they have been dealing with domestic abuse.

How poignant is that description of the house where the women’s group met? I’ve been to little houses like that myself when I was running the gauntlet post-separation.

Support services for victims of domestic abuse are dreadfully underfunded. These services often have to carry out their work from run-down, dilapidated, unkempt premises. The workers at those services put all their efforts into helping victims. Getting the grass at the front mown, or getting the shop-front spruced up, is not a high priority when their clients are facing serious threats from abusers and are on the brink of homelessness.

When frightened victims who are already suffering under a weight of shame go to those service agencies, they feel the shame and stigma even more. They get the message:– This is how much society values you. These unattractive premises is what our society is willing to provide to give a few crumbs of support to victims of domestic abuse.

I wonder if Chris saw the significance of that when he went to that little house. Did he see how demeaning it was for victims to hear that message from society?

Let us see how seriously Chris took the feedback he received from victims. Did it shape what he tells church leaders?

Women who are victims of domestic abuse told Chris how they had been disciplined or shunned by their churches for filing for divorce, so they ended up leaving the church while their abusive husbands remain in the church. You would think that ought to shape how Chris talks to church leaders.

Surely Chris would be shouting this from the rooftops, telling church leaders they must stop treating victims so unjustly?

In Appendix D of his book that I cited above, Chris advises church leaders about church discipline in cases of abuse. His Appendix D is titled Church Discipline and Domestic Abuse;  it has three subheadings:

You will have noticed that his point 2 is double-barreled. That in itself is confusing!

Here is Chris’s advice to church leaders about considering their options in church discipline:

Most church discipline operates under the direction of Matthew chapter 18 in which Jesus instructs us to confront a brother who sinned against us on an individual basis. If he is unrepentant we take along others to confront him, and so on. If the process is exhausted and he remains unrepentant we are instructed to treat him as an unbeliever. This process is utilized consistently in the life of the local church and most conflicts are resolved long before they reach a congregational level. While Matthew chapter 18 is the appropriate process for church discipline, the apostle Paul indicates that some behaviors cross the line, as it were, and require immediate action. Paul cites such a case in 1 Corinthians chapter 5 in which an individual engages in sexual relations with his step-mother. Paul calls for immediate removal from the fellowship. Church discipline does not appear to be “one size fits all” and requires wisdom when dealing with sinful behavior:

Do any of the following – domestic violence, sexual assault, child abuse, or neglect warrant 1 Corinthians chapter 5 response by your church’s leadership?  (ibid, p 144)

Since Chris took a ‘question-them-gently’ approach in this appendix which he wrote for church leaders, I will start by using that same approach with him. And I’ll refrain from putting my questions in bold (even though I would like to) because I’m trying to mimic Chris’s gentle question.

Here are the questions I put to Chris Moles:

Now I will stop trying to copy Chris’s gentle style and go back to using my own voice.

Chris’s question to church leaders is pathetic. It is lame, timid, weak. It doesn’t cut to the chase. Why is he not telling church leaders that they are often treating victims with MASSIVE injustice?

Could it be that he doesn’t want to lose all those speaking engagements and book sales he gets from churches and biblical counseling organizations?

Why is he simply asking them a wee little question that he buried at the back of his book?

Why doesn’t Chris Moles tell church leaders that abusers are manipulating the Matthew 18 process and that is one of the main reasons why the abusers are remaining in the congregation while the victims are slinking out the back door, tarred with the brush of stigma and shame?

Chris heard those women’s stories. And he does almost nothing about it.

I am saying ‘almost nothing’ to be fair to Chris, because I have found one place where he has been slightly more bold…and probably a few church leaders were in the audience at this talk (Q*) which he gave at a Biblical Counseling Conference in February 2018. This is what he said:

We have been doing a disservice to victims and perpetrators. I spend about a third of my time working with perpetrators, and a third answering emails from victims. The other third is made up of consulting with churches about cases, and defending biblical counselors.

I can’t tell you the numbers of survivors I know who have been disciplined out of their church because they refuse to submit to abusive husbands – but it’s a lot more than you probably think.

Let us now go back to Appendix D in Chris’s book. In point 3 of that appendix Chris says:

Church discipline should not only be used as a means of protecting the victim and holding the offender accountable, but also as a means of reconciliation with God. The process can offer the abusive person concrete steps to repentance and expectations for moving forwards in holiness. The truth is an abusive person should not last long under the weight of church discipline. Their desire for control and beliefs of entitlement with either be crushed beneath the Gospel and repentance will lead to a brother won, or they will become emboldened by their own pride rejecting the church and the Gospel.
(“The Heart of Domestic Abuse” p 145)

What an unwise statement, given the testimonies Chris heard from those Christian women about how churches often side with abusers!

Those women told him how they had:

I wish Chris would look at our FAQ page How does church discipline applies in cases of domestic abuse?

And I wish he would publicly repent of the foolish and limp advice he gave to church leaders in Appendix D of his book.