The True Story of the Damaged Daughters of Patriarchy – a memoir

Recently a woman from the UK contacted us and said she’d published her story, Fake Someone Happy [*Affiliate link],  a firsthand account of her relationships with families from an American patriarchy/homeschooling group. She sent me a copy and I finally got to sit down with it this past week. Amazingly enough, right after I finished this shocking book, Julie Anne over at Spiritual Sounding Board posted the announcement that Doug Philips had resigned his position at Vision Forum – a very well-known patriarchal ‘ministry’ that is coughing up refugees at a rapid rate. 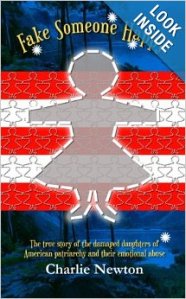 Fake Someone Happy: The true story of the damaged daughters of American patriarchy and their emotional abuse

I’ve asked others to read this book, who are more acquainted with American patriarchy and the cultish aspects of it. I was not raised under patriarchy so I have limited understanding of all of the players on this stage. What I do know, however, is abuse.

The author and her family were treated shamefully by the patriarchs of the families they befriended. Throughout all of this ill treatment, she and her family had good intentions and tried to help one of the daughters escape. This speaks volumes about their level of commitment to God, that they were willing to take in a victim for several months. We know how hard it is to find Christians willing to stand with us when we flee domestic abuse and our marriages — this family was willing and they did the incredibly hard work.

The end result is not what anyone expected. There was so much hidden abuse uncovered very late – and even then, the victims’ mentality is difficult to understand for someone new to the arena of abuse. Rather than dwell on this patriarchy group and its smorgasbord of aberrant theology, I want to focus on the abuse in this story (since that’s the focus on this blog). My hope is that other blogs will pick up this book and give it the attention it deserves.

The title of this book mentions emotional abuse — and there is plenty of that. However there is also: verbal, physical, psychological, spiritual, financial, sexual, and social abuse. The child sexual abuse is the hardest. When children are raised in prolonged abuse, their personalities and growth are stunted. The girls in this book remained at an elementary-school age, as far as emotional maturity and ability to make decisions. When pressed on the sexual abuse, one of the victims had big holes in her memories (very common for sexual abuse survivors).

Some of the discoveries include the main patriarch’s pornography addiction, older brothers sexually abusing their younger sisters, one sister exercising abusive sexual control over another, and adult children trapped in their parents’ house due to financial control and lack of job skills. These children did not grow up to be whole adults. They are handicapped, in a sense. The girls seem totally dependent on the people around them to have any thoughts of their own. It is as if  these children had been emptied of their Spirits, and they are left as shells. None of the victims in this story show much evidence of flourishing and having healthy relationships. Instead everyone seems to be wearing the fake happy mask.

We know that Abuse is the murder of a person’s spirit. Sometimes that leads to physical murder as well.  This is the first account I’ve read that clearly describes the murder of a child’s spirit within them, and the results. I recommend this book to anyone associated with patriarchy and / or the Quiverfull homeschooling groups.  This is a very good reason not to financially support certain “ministries” that promote this cultish, man-centered religion.

One last note on the church in America:  within this story is a letter that Mr. Halcombe (the father in the English family) wrote to a pastor in America, to warn him of the wolf that was invading his flock. (pages 201-205) In this letter he lays out all of the abuses and events that have transpired and ends it with:

The Catherick family are desperate to preserve their reputation by spreading lies about Laura, and probably my own family. They will fail. We are a Presbyterian family devoted to our Triune God and committed to the Westminster standards of 1649. Our orthodoxy and trust in our Lord Jesus Christ cannot be denied. We stand or fall by our own Master.

Walter Catherick is an unexploded bomb in your midst. Deprived of her sister to dominate, Anne Catherick may well look for other females to control, masking her ungodly desires with a veil of spurious piety.

I trust and pray that you are willing and able to deal with them before further damage is done to your congregation. They cannot all seek sanctuary elsewhere. Yours because His, Thomas Halcombe

As we on this blog are sadly accustomed, the pastor ignored this letter.

The worst part for me personally, was reading all of the desperate attempts to get help from American Christians, and being met with silence, ignorance, and self-righteous indignation. We know that this does not reflect all of us here in the American wing of the body of Christ, but it stings just the same.