UPDATE  Sept 2021:  Barbara Roberts has come to believe that Jeff Crippen does not practise what he preaches.  He vilely persecuted an abuse victim and spiritually abused many other people in the Tillamook congregation. Go here to read the evidence. Jeff has not gone to the people that he spiritually and emotionally abused. He has not apologised to them, let alone asked for their forgiveness.

I have written something to the church, but Diotrephes, who likes to put himself first, does not acknowledge our authority. So if I come, I will bring up what he is doing, talking wicked nonsense against us. And not content with that, he refuses to welcome the brothers, and also stops those who want to and puts them out of the church. (3 John 1:9-10)

You all know how it goes. We see wickedness in our church. Somehow it is brought to our attention. Here is this church member who puts himself off as a fine, holy saint, but is guilty of living a double life. He is a fraud. A hypocrite. Domestic abusers often come under these headings. So, perhaps we are one of the few who see the evil. What do we do about it?

Diotrephes is a prime example. Here was a professing Christian who, because of his lust for self-worship and acclaim, put himself first and even rejected Apostolic authority. Anyone he viewed as competition he jealously rejected or put out of the church. 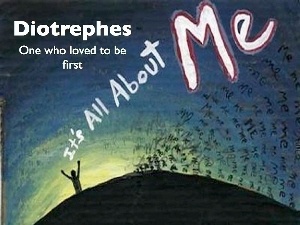 Today we are told to be quiet. To not bring it up. To never speak against a brother and that if we do so, we are guilty of gossip or slander. We are told not to judge. You know the same old schtick.

What did the Apostle John do?

I have written something to the church, but Diotrephes, who likes to put himself first, does not acknowledge our authority. I’m not going to bring this up when I come because we mustn’t judge anyone and we must forgive our brother if he sins against us. I intend to preach in general terms about the need for Christians to be humble and put others before themselves. Please join in prayer with me so this message will be heard, in Jesus name. Amen.

No. John wrote and said what he was intending to do. “I will bring up what Diotrephes is doing.” And John means right in front of the whole church!

So what happens typically today? It comes to the attention of the church leaders that one of their own is a two-faced hypocrite who is seen as the most holy man on Sunday in the church setting, but in fact is a domestic tyrant abuser at home. What happens? For some reason completely unknown to me, the first efforts are not to seek justice and protection for the victim, but to protect the reputation (a false one mind you) of the wicked one! All is hushed. “We must keep this thing quiet. We must protect reputations you know.”

When you are assembled in the name of the Lord Jesus and my spirit is present, with the power of our Lord Jesus, you are to deliver this man to Satan for the destruction of the flesh, so that his spirit may be saved in the day of the Lord. (1Cor 5:4-5)

Right out there! In the open. For all to see. He’s a fake Christian and his evildoing is so heinous — and so harmful to the church — that you get must get rid of him without delay. 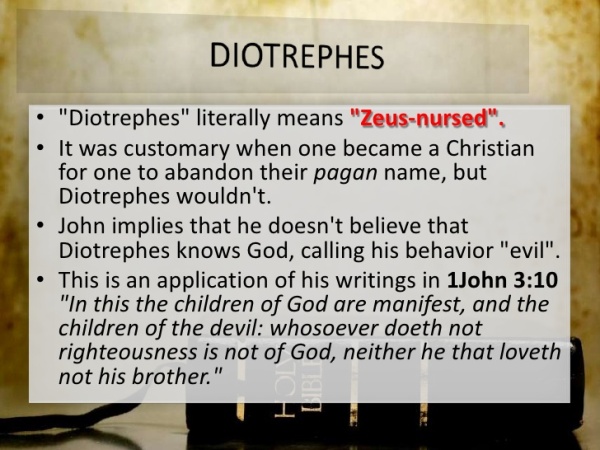 And isn’t that how it has always been from Genesis to Revelation when it comes to dealing with the wicked — especially those who pretend to belong to Christ and creep in among us?

If someone is caught kidnapping a fellow Israelite and treating or selling them as a slave, the kidnapper must die. You must purge the evil from among you. (Deut 24:7 NIV)

“Never Say Anything Critical of One of Your Own” — Wrong!

Blessings and Woes from the Politically and Spiritually Incorrect Lord Jesus Christ, and Naming Names