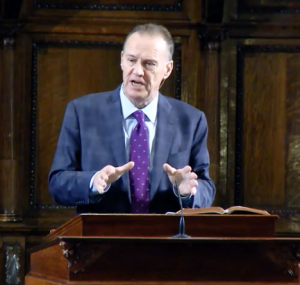 The book of Esther illustrates the providence of God — how He works through people and situations to effect His plans and purposes for the good of His people.

In this chapter there is a great reversal: the powerless are given power.

Chapter 3 had recounted how Haman and his allies had thrown lots every day for a year to pick the best day for the annihilation of the Jews. As superstitious pagans, they’d put immense effort into divining the ‘lucky day’ for their plan of ethnic cleansing to be put into effect, and by this means they’d selected the thirteenth day of the twelfth month.

Then Haman said to King Ahasuerus, “There is a certain people scattered abroad and dispersed among the peoples in all the provinces of your kingdom. Their laws are different from those of every other people, and they do not keep the king’s laws, so that it is not to the king’s profit to tolerate them. If it please the king, let it be decreed that they be destroyed, and I will pay 10,000 talents of silver into the hands of those who have charge of the king’s business, that they may put it into the king’s treasuries.”  …

Letters were sent by couriers to all the king’s provinces with instruction to destroy, to kill, and to annihilate all Jews, young and old, women and children, in one day, the thirteenth day of the twelfth month, which is the month of Adar, and to plunder their goods.

And now, in chapter nine, we see how God effected the great reversal on that very day which the pagans had picked as their lucky day:

(Esther 9:1) Now in the twelfth month, which is the month of Adar, on the thirteenth day of the same, when the king’s command and edict were about to be carried out, on the very day when the enemies of the Jews hoped to gain the mastery over them, the reverse occurred: the Jews gained mastery over those who hated them.

(Philippians 1:27-28) Only let your manner of life be worthy of the gospel of Christ, so that whether I come and see you or am absent, I may hear of you that you are standing firm in one spirit, with one mind striving side by side for the faith of the gospel, and not frightened in anything by your opponents. This is a clear sign to them of their destruction, but of your salvation, and that from God.

On the thirteenth day of the twelfth month, rather than wait for their enemies to ‘bring it on’, the Jews take the initiative. They turn the tables on Haman’s cut-throat mob. They kill 500 men in Susa the capital city and 75,000 men across the rest of the Empire from Ethiopia to India.

When Ahaseurus the psychopath hears that 500 men including the ten sons of Haman have been killed in Susa, he is not distressed by the carnage. The report of the city’s death toll doesn’t restrain Ahausuerus, rather, it excites him! It make him keen to know how much carnage was happening in the rest of the Empire!

And he invites Esther to make one more request. At this point (for some commentators) Esther has her darkest hour. She asks for one more day to clear up in the royal city. They’ve cleared up the citadel; now they need to clear the streets. And she asks that the dead sons of Haman be hung up on gallows. You will recall that Haman had already been hung on the gallows he had prepared for Mordecai. Now Haman’s sons have been killed, and Esther is asking King Ahasuerus to have their dead bodies hung up on gallows. This would mean putting them indubitably under the curse of God — cursed is him who is hanged on a tree.

Esther is not being sinful here; the commentators who call it Esther’s darkest hour are wrong. There is history behind this, just like there is always a backstory in the victim’s account of domestic abuse.

(Deut 25:17-19)   “Remember what Amalek did to you on the way as you came out of Egypt, how he attacked you on the way when you were faint and weary, and cut off your tail, those who were lagging behind you [the women, the children, the elderly and the infirm], and he did not fear God. Therefore when the LORD your God has given you rest from all your enemies around you, in the land that the LORD your God is giving you for an inheritance to possess, you shall blot out the memory of Amalek from under heaven; you shall not forget.”

But Israel had not been obedient to that command of God. God gave that command to signal to his people from that time onwards: “I love My people and I will not ignore those who are their enemies. I care if anyone threatens the survival of my people! I care about My people more than anything else!”

Fast forward to the time of King Saul. (Did you know that Mordecai and Esther were related to King Saul? — cf 1 Sam 9:1-2 and Esther 2:5)  King Saul, the first king of Israel, had had the opportunity to deal the Amalekites a decisive blow. God had instructed Saul:

(1 Sam 15:3) “Now go and strike Amalek and devote to destruction all that they have. Do not spare them, but kill both man and woman, child and infant, ox and sheep, camel and donkey.’”

But instead of chopping off the head of Agag king of Amalek as he ought to have done, Saul let Agag live and he took as plunder the Amalekites’ valuable livestock. Samuel the prophet rebuked King Saul for his disobedience. And God took the kingdom away from Saul.

So God and the Jews definitely had unfinished business with Amalek.

Esther understood the biblical principle of holy war. She knew that you only made war against those who God told you to make war against. God had proscribed certain groups of people, and them and them alone were Israel to fight. So Esther was not making war on the Amalekites out of blood vengeance or spite; she was making war on them because they were God’s enemies.

Furthermore, the original edict signed by King Ahasuerus, Haman the Amalekite and his friends were empowered to destroy, to kill, and to annihilate all Jews, young and old, women and children, in one day … and to plunder their goods. And the second edict empowered the Jews to annihilate any armed force of any people or province that might attack them, children and women included, and to plunder their goods. (Esther 8:11-12)

Part 3: Of Plots and Kings — Liam Goligher’s 3rd sermon on the book of Esther

Part 4: If I Perish, I Perish — Liam Goligher’s 4th sermon on the book of Esther