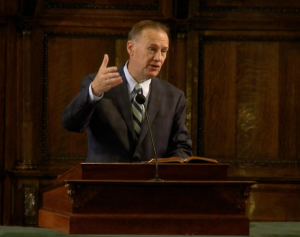 In the book of Esther both of those mysteries are working simultaneously.  But we’re given a clue today that Providence will win in the end.  God’s good government will win in the end.  Let that support you, let that strengthen you when things start to unravel.  May God make us, as his people, people of such fortitude that we encourage each other and strengthen one another in the battles that lie ahead.

As a pastor and as a Christian I believe there to be no greater issue among our church folk, unaddressed and largely unrecognized, as domestic violence (whether emotional, psychological or physical). I am so delighted to know you are raising a standard against it.

Part 4: If I Perish, I Perish — Liam Goligher’s 4th sermon on the book of Esther