We were right! Dallas Theological Seminary has been using “Sexual Issues” in their BC101 Class

Ok. Here’s the scenario. Back on Feb 20 we published a review of a horrid book entitled Sexual Issues: A Short-term Structured Model by Harold Wahking and Gene Zimmerman. You can read that review here. One of our readers some time ago had informed us of its use in the Dallas Theological Seminary counseling program, and we included that fact in our post. (Click here for that reader’s affirmation of the fact that she passed on the info to us.)

Soon after that post was published, a comment was submitted by John Dyer, Executive Director of Communications and Educational Technology at Dallas Theological Seminary. Here is the important part of his statement (emphasis added):

The stated book, “Sexual Issues” by Wahking and Zimmerman is not a required, recommended, or endorsed text at Dallas Theological Seminary. Although the book is out of print, it is available at our library along with many other books that DTS would neither endorse nor recommend. In the MA in Biblical Counseling program at Dallas Theological Seminary (Master of Arts in Biblical Counseling (MA/BC) [Internet Archive link]) students are correctly taught how to report abuse and the ethical and legal guidelines they must follow.

Well, it turns out that we were right, even though DTS told us we had it all wrong.

We did additional investigation. We sent one of our own team to the DTS library. The clerk at the library desk specifically said that this book is on reserve for this present semester of Biblical Counseling 101, and the staff teaching that course are Dr. Barnes and Dr. Dickens. She said it is on reserve so that all students of the class can have access to it for 2 hours at a time (as with all reserve books).

On 17 March we emailed three senior staff members at DTS, John Dyer, Gary Barnes, and Chip Dickens, asking if they would like to issue a corrected statement concerning the use of Sexual Issues in the counseling program at DTS. We gave them a six day window in which to respond. Professor Dickens and Professor Barnes have not replied to us at all. John Dyer emailed us on March 18, saying

It sounds like the confusion may be have been that the Wahking/Zimmerman book, while not a required text, has as part of a series been on course reserve at the library, and that the syllabus has a required assignment to address sexual issues.

So DTS finally admits to what we have been saying all along. But of course they don’t express it as a confession of wrong— Dyer called it a ‘confusion’. To us that sounds like weasel words. Dyer may have been confused, but we were not. Nor were the Professors who teach that course: they know very well what the course syllabus says.

Here is the BC 101 Syllabus taught by Dr Charles Dickens in Spring 2013 [Internet Archive link]. (if the link no longer works let us know)

Assessment task 3 in the course, worth 40% of the marks, is as follows

Each student will select one of the ten volumes from the Strategic Pastoral Counseling Series [“Sexual Issues” is one book in that series]. . . . Each student will prepare and present a 20 minute powerpoint workshop as though they were leading a professional training for pastors in Strategic Pastoral Counseling Model applied to their particular topic. Each student’s powerpoint presentation will be uploaded to the course website for all students of the class to download for future use.

That means the book Sexual Issues (as part of a 10-volume set) would fulfill required reading for students who are studying Biblical Counseling 101. 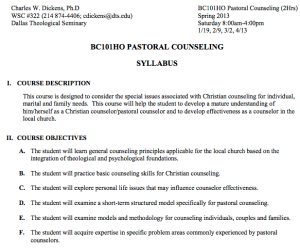 That is not a peripheral use of a book. It show that the Professors of Biblical Counseling at DTS thought the book Sexual Issues was very good.

We have hard evidence on DTS, but DTS may not be the only seminary using this book to teach counseling. We know that this book is in other seminary libraries.

DTS’s response to us fell short of what we had hoped for. We believe that at the very least they should have said: “You were right. That book is being used in our course. It should not have ever been used. This was a mistake and we are correcting it.”

Let’s remember that the book Sexual Issues encourages pastors to consider not reporting child sexual abuse by a perpetrator if the perpetrator seems repentant!  This is not its only deficiency, but this alone disqualifies it for use in any counseling class. Here’s the passage from page 162:

Sometimes there are alternatives, though they are very difficult in terms of the Christian ethic. You may want to consider talking privately with the perpetrator, and if he or she confesses and commits to not being abusive again and enters professional counseling immediately, you may commit yourself to not reporting the abuse for now while maintaining close contact with the person’s therapist.

Criminey!! Are you kidding us? How many of our readers would say ‘Oh, well hey, if my abuser confesses to what he did to me and promises he won’t do it again, then all will be well’ ? And how many survivors of sexual abuse have been re-abused and re-abused because that kind of garbage is told to them by church leaders? Pleeeeeezzzz!

The senior people at Dallas Theological College Texas must be aware of  the Texan law for reporting child abuse. Yet they have been endorsing a book which gives advice directly opposing that law.

A person having cause to believe that a child’s physical or mental health or welfare has been adversely affected by abuse or neglect by any person shall immediately make a report as provided by this subchapter. The requirement to report under this section applies, without exception, to an individual whose personal communications may otherwise be privileged, including an attorney, a member of the clergy, a medical practitioner, a social worker, a mental health professional, and an employee of a clinic or health-care facility that provides reproductive services.
Clergy as Mandatory Reporters of Child Abuse and Neglect [Internet Archive link]

And that’s not all. Page 162ff goes on to say that a decision not to report is probably against the law, but the pastor may decide not to report if the following conditions are in place: (honest, this is what this crazy book says),

1. There is reliable basis to believe the abuse has stopped.
2. The perpetrator is alarmed and will not act again.
3. The other parent is fully aware of what has happened.
4. The child is protected both by receiving counseling and by being reassured that if anything abusive happens again, he or she is perfectly free to report it, and
5. Reporting would lead to destruction of home and marriage because of imprisonment and scandal.

Oh yeah. We can’t have imprisonment or scandal, especially in a “Christian” home. Best to just keep the fact that a child was raped or sodomized secret — “just between us, you know.”

In the thread of our first post, John Dyer told us they would be removing the entire series to which that book belongs but the decision would have to go through a committee first. We are prepared to accept that a committee resolution might be necessary to remove an entire series of books from the library, especially if that would also entail a rewriting of some curriculum. But this is child sexual abuse we are talking about! It’s not some debatable issue like sprinkling versus immersion baptism. Isn’t it hiding behind process to say you can’t take a book of the shelves until a committee has passed a motion? DTS have been quite content to leave the book on the Reserve shelves in the library. And according to Dyer, they don’t still see removing the book as an urgent matter. Here’s the relevant part of his 18th March email:

after reading your original post we’ve decided to remove the Wahking/Zimmerman book from the library to remove any possible confusion or misunderstanding that DTS would endorse or recommend what the book teaches about reporting abuse.

Well there’s nothing new there, Mr Dyer — you told us that back on Feb 24th!

We believe that anyone who really cared about victims of abuse would have instructed the librarians to immediately remove the book from student access until the committee had met and formally passed its resolution to dispose of the entire series.

Are committee timetables and deliberations more important than present and future victims of child abuse?

The library clerk our team member talked to seemed to have no inkling that concerns had been expressed about the book.

NOTE: in subsequent posts we will be revealing more of the anti-biblical nature of this book. The problems are throughout the book, not merely with the part that advises not reporting child abuse as a viable option for the pastor.