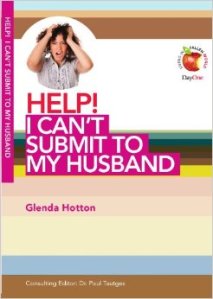 This booklet is part of the Living In a Fallen World booklet series published by Day One Publications, Paul Tautges, consulting editor. The author of this particular installment in the series is Glenda Hotton. Hotton’s credentials listed on the booklet state that she is a counselor, a professor of Women’s Issues, a speaker for women’s groups, and has a web site at http://www.glendahotton.com.

Ok, so there is the introduction. Now to get down to it. I think that the woman pictured above on the cover of this booklet is supposed to be struggling with submitting to her husband. I have another theory. She has become aware of the abuse she has been suffering, and she just finished reading this booklet!! It is bad. Very bad.

Under the “Where Can I Get Further Help? section at the back of the booklet you will find some notorious sources well known to us all:

Here are a few quotes from the book and then I will have to leave off because this stuff is so hard to read:

Judy had been married 17 years when she came into my office. I recognized the symptoms of wife abuse immediately but waited to hear her story….Her husband is a leader in their church and community. On the outside she is the epitome of the sweet submissive wife who stands beside her husband through thick and thin. When her husband found out she had gone to their pastor for help, he was furious and became more abusive — threatening her life if she ever embarrassed him like that again. He told her that if she though he was abusive, it was her fault for not being more submissive. Judy had had enough. Although hesitant to talk, she came for help.

Carol, a prominent Christian physician’s wife, reported verbal abuse so demeaning that she had come to believe her husband’s remarks that she was a horrible Christian, and unloving wife, and could do nothing right. She reminded me of a squashed potato bug; no substance left.

Hotton then makes the following statements

The abundant life is not a problem free life or continually happy circumstances; it is a life of ‘overcoming’ temptations and trials with the wisdom and strength that Jesus gives. God wants His children to be full of the joy of Christ.

It is grievous when a woman reaches the place in her marriage where she feels that she absolutely cannot and will not submit to a harsh and thoughtless man.

There comes a time when each of us needs to decide to get along with our husbands, not because he deserves it or because we feel like it, but because we choose to honor God and live our lives according to his will, not ours.

Hotton goes on in the same vein, even citing the example of Nabal and Abigail to support her notion that the wife is to submit, period. I don’t see how Abigail supports Hotton’s thesis (see Megan’s earlier post on Abigail). Needless to say, Hotton never mentions the option of divorce for abuse (I’m not sure she mentioned it at all). Submission, she says, is “a God-given privilege and necessity in order that homes run smoothly. She then rebukes any wife who demonstrates a complaining, “poor me” attitude and just becomes a “troublemaker.”

I would like to be nice to Hotton. I would like to believe that her motives are sincere, that she is truly trying to help women. But Jesus went to the hearts of the Pharisees for laying these very kinds of heavy and unbiblical loads upon the oppressed. The Lord knows her motives perfectly and I do not. But I can be suspicious. This booklet contains so many absolutely wrong and harmful things, Hotton even puts a woman’s very life in danger. How can she not know that? She claims to have heard hundreds of abuse stories directly from women. – “I have heard her type of story hundreds of times.” So how can she not know that her advice to them is sending them right back to die – if not by a bullet, then by the soul and even body killing of psychological, emotional, and spiritual abuse?

Glenda, to you I say this: if you have truly heard from that many abuse victims, and yet you are still persisting in sending them back to their deaths, if you are still misapplying Scripture, gutting it of God’s mercy, then you are either incredibly foolish or incredibly evil. Does that sound horribly harsh for me to say? Well, what other conclusions are there?