Nearly four decades ago, Don Hennessy was working in the Irish city of Cork at the Cork Marriage Counselling Centre. They identified domestic violence as the underlying issue for about 30% of their clients. It was identified as a pattern of abusive and violent behaviour that allowed the offender to control his intimate partner. Thus began the Cork Domestic Violence Project. As all the offenders were male, they decided they needed to engage with the men concerned in a way that would stop the violence. (link)

When dealing with an abusive man, they realized they must always see the woman he was abusing as their client, while seeing the perpetrator as an offender. Adopting this paradigm, they knew they had to prioritize the client’s (the woman’s) safety whenever they did anything with perpetrators.

Hennessy describes how, after two years of preparation, they began conducting treatment groups for abusive men (How He Gets Into Her Head: The Mind of the Male Intimate Abuser, pp 12-13 [*Affiliate link]) 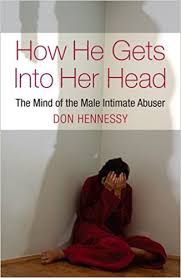 But after some time of running those groups they came to the conclusion that the groups were not doing much good and were dangerous in some cases.

The Cork Domestic Violence Project was one of the few programs in the world that dealt in depth with both perpetrators and victims. This is important. We know that many marriage counselors and pastors unwisely and dangerously do couple counseling in domestic abuse cases. We also know that most agencies which specialize in domestic abuse do not work intensively with male perpetrators and the men’s victims – most agencies specialize in either perps or victims. Bear this in mind when reading quotes I give from Hennessy’s book.

And to all our dear readers who have suffered the perils of couple-counseling for domestic abuse, let me put your trepidation to rest. Once the staff at the Cork Project became astute to domestic abuse, they did not do couple counseling in abusive relationships. They met with the two parties (perpetrator and victim) separately. Hennessy gives an example of what that looks like on p 112 of his book.

Note: all quotes from Hennessy and Irish media articles use British spelling to retain authenticity. (And Barb breathes a sigh of relief as she dislikes using American spelling, but that’s our default on this blog because we think most of our readers are from the USA.)

Our own experience was that we were continually reminded of our inability to create lasting change [in the offenders]. We were also constantly reminded that we ran the risk of increasing the danger to our clients. We gradually wound up our group work with perpetrators as we became convinced that work with batterers should not be done in isolation but requires inter-agency efforts and multidimensional initiatives. What has become clearer in the last few years is that perpetrator programs are at best unhelpful and may even prove to be a further risk for sufferers of abuse. (13)

Over the final years of working with perpetrators we also began a detailed study of the patterns of behaviour that all these perpetrators engage in. Our initial belief was that there was a way of talking to perpetrators that would have some effect on their behavior. We began to realise that we could be more effective in our goal of client safety if we listened to and observed the perpetrators. We were also in a fairly unique position of being able to listen to and observe the clients. We were one of the very few groups that worked intensively with both the perpetrators and the clients. This allowed us to observe how both the clients and the perpetrators behaved towards us and towards each other. It also allowed us to study the attitudes and the language that surrounded these relationships. What began to emerge was a process which underpins all adult abusive relationships between intimate partners. (13-14)

It’s a long-term process. Most abusers are very skilled and very patient. They do not take chances. They assess and monitor their target’s responses every step of the way.

He also talks about

I will be amplifying each of those bullet points in upcoming posts in this series.

I encourage you to obtain Hennessy’s book and read it for yourself.

If you have a leadership role in a church, Hennessy’s book will help you better understand how abusers work to pull the wool over your eyes to what is really going on.

If you are a survivor of intimate partner abuse, you could ask your local library to get it in if you can’t afford it. We have also added it to our Gift Books Offer. The book gives lots of case studies to illustrate what I am summarizing in this series. I think that every one of those case studies will ring bells for survivors of domestic abuse.

Update: Don Hennessy’s next book, Steps to Freedom [*Affiliate link], will be coming out in July 2018. It will be different from most ‘sympathy’ and ‘support’ books which rely on the target woman to protect herself. Instead it talks directly to the target woman while she is being controlled and hopes to give her the permission and the skills to protect her mind and her soul.

Our Don Hennessy Digest lists all the posts in this series and gives biographical details of Don Hennessy.

Note: I contacted Don Hennessy via his publisher and he has very generously allowed me to quote as much as I like from his book to pass on the message to others. Thank you Don!

*Amazon affiliate link — ACFJ gets a small percentage if you purchase via this link.