Putting the “Gossip” Accusation to Rest Once and For All

1 Co 1:11 For it has been reported to me by Chloe’s people that there is quarreling among you, my brothers.

If you have had the misfortune of being targeted by the religious abuser, there is little doubt that the subject of this post is familiar to you. “Pious” abusers love to use the gossip tactic to silence the victim saying anything negative about them to anyone else. I have experienced this very thing many times, and like most of you, I let it trip me up for quite a while until I came to my senses and realized what was really going on.

Abusers work hard to maintain a code of silence in their homes. This is one reason that you never really know what happens inside their walls. They don’t like their victims getting close to anyone and they work at isolating them. Should their victim ever say anything negative (or sometimes even positive) about them to anyone else, or even share with others in normal conversation what they did the previous day at home, etc., the abuser will come unglued. And very typically what he will do is make this gossip accusation, citing Scripture as his support. “Gossip is evil. Slander is a sin. As my wife you have disrespected me by talking about me.” Guilting. Accusing. You know the drill.

The single verse cited above fully and finally devastates this gossip accusation tactic. “Chloe’s people” had come to the Apostle Paul and reported to him what was going on in the church at Corinth. Bad stuff. Division. Arrogance. Sin being tolerated in the church and even some members suing one another! Chloe’s people (the church who met in Chloe’s house?) “gossiped” big time to Paul! What did Paul do? He listened to the report, he believed it, and he sat down and wrote this letter calling the guilty ones to repentance. Oh yeah. He did just that.

I remember once many years ago telling one of our church board members (long since out of our church for sin) about an obvious, ongoing sin that was evident in the life of one of the other members. My motive was good. It was for calling the guilty person to accounts and to repentance, and for the protection of the church and for the glory of Christ. What did this board member do? Pulled the gossip card. “Pastor, are you sure it is really ethical for you to be telling me this?”  I was taken aback. I felt guilty. I fell for it hook, line and sinker. This proved to be a pattern in this board member’s life. Narcissism, control, craving power. He was characterized by secrecy and silence, so much so that his own immediate family members very often knew nothing about what other members of their own family were doing. An atmosphere of paranoia reigned in that home. Never, never, never talk. Never, never, never tell. That would be gossip.

So don’t fall for this line. In fact, why don’t we all memorize 1 Cor 1:11 and quote it the next time one of these characters pulls the gossip gun on us? 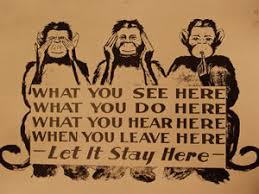