[April 28, 2022: There have been some changes made to this post. For more information, read the Editors’ notes at the bottom of the post. Editors.]

Our friend Jessica Fore has been formally charged by her church Elders (Presbyterian Church in America) with contempt for refusing to comply with their orders that she, essentially, just be quiet about her cries for justice. The following is Jessica’s own story which she released today on her blog, Jessica Fore. Her blog post is I might get excommunicated for this. [Internet Archive link], and she also shared the story here on her Facebook page.

I am a survivor of domestic violence, and I just got formally indicted by the Presbyterian Church in America (PCA) for not cooperating with various instructions about speaking out regarding my experience of injustice surrounding abuse in the church.  Indictment is the first step in a disciplinary process that can lead to excommunication, and it’s meant to be employed only when someone is committing heinous sin.  My crime?  Holding this sign, among other things: 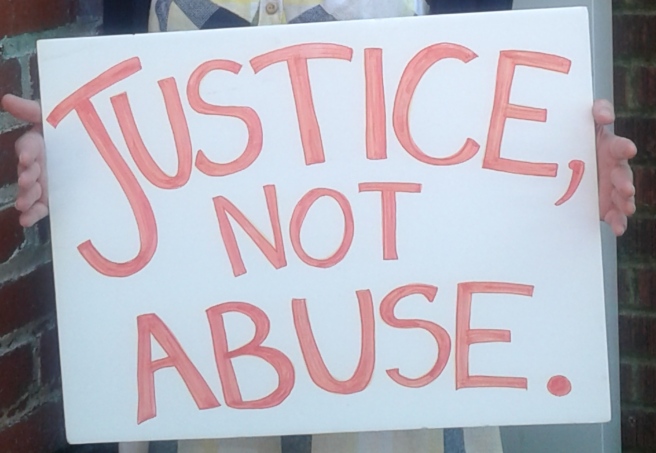 Below is the indictment issued by Faith Presbyterian Church in Watkinsville, Georgia (with non-officers’ names redacted.)  My response follows. 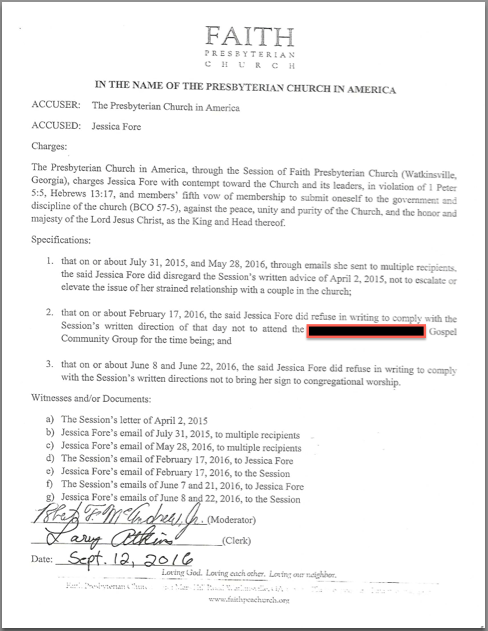 To Whom It May Concern:

This is in response to Faith Presbyterian Church’s formal indictment of me for “contempt toward the Church and its leaders,” dated September 12, 2016.  First, I will summarize the events leading up to the indictment to the best of my recollection:  I was hired as Faith’s worship leader in the fall of 2008.  I was married to an abusive spouse at the time.  My husband’s abuse escalated and became known in a dramatic way with copious evidence over the course of several months in 2009.  Audio recordings, photographic evidence, police reports, psychological evaluations, and eyewitness testimony by various Elders and church members corroborated his abuse, lying, and criminal activity.  Nevertheless, the church predicated me keeping my job on reconciling and cohabiting with him, and ultimately fired me for remaining separated.  I was already in a vulnerable financial situation and was plunged into poverty for the next three years.  Had it not been for the help of friends and family, I would have become homeless.

After I recovered, I confronted the Session about what it had done.  In 2013, after much arm twisting, the Session issued a public apology for its lack of “shepherding care” when I experienced a “series of extremely painful events.”  Abuse was not mentioned.  The Session never expressed repentance for firing me, never set the record straight with the congregation that I was a victim of domestic violence, and never pursued any kind of restitution.  I have seen no substantive change in the Session’s attitude toward abuse in the church.  I have not seen the Session deploy any new churchwide policies or leadership training that would improve the church’s response to abuse victims in the future.  On the contrary, as I have continued coping with the fallout from all of this, the Session has taken new adverse actions against me.  In 2014, the Session affirmed my closest friends shunning me in response to me trying to resolve a related grievance with them.  In 2015, the Session brought a Licensed Professional Counselor, a church member, into a Session meeting to advise on my mental state and what was best for me in absentia, without my knowledge or consent, based on the testimony of the opposing parties in the grievance.  In 2015, the Session launched a formal disciplinary investigation into the grievance that consisted of having one called Session meeting with the opposing parties and then issuing written conclusions and directives at me.  In 2016, the Session attempted to limit my fellowship in the church without due process by instructing me not to attend a Gospel Community Group which I had previously attended faithfully for several years.

After many patient attempts to address these issues privately, I sent an open letter to the whole church via email in July 2015 and a follow up letter in May 2016, and I escalated a formal complaint which is currently pending before the Georgia Foothills Presbytery.  I attended my Gospel Community Group and said that I would keep attending in defiance of the Session’s attempt to restrict me without due process.  In the last few months, I have kept a sign propped at my feet during worship which reads “Justice, not Abuse.”  The sign is my personal expression of lament in worship, and a visual reminder to everyone that these things are happening and the Session still hasn’t repented.  So now the Session has decided to formally indict me, the first step in a process that can lead to excommunication, not in response to me committing any immoral act, but simply for not “submitting” to the Elders.  Elders told me not to send my letter, not to attend my small group, and not to hold my sign; I did it anyway.  The Session issued the indictment on my birthday and appointed the attorney / Elder who mediated my divorce to prosecute the charges.

Here is my response:  when I joined the church, I agreed to submit to its government and discipline as constrained by the Word of God and the PCA Book of Church Order.  The Session is in violation of both as delineated below and in my formal complaint before the Presbytery.  The Book of Church Order affirms individuals’ inalienable rights of private judgment on all matters which are not explicitly in violation of God’s law, and prohibits church leaders from making any additional laws to bind the conscience, as discussed in the following BCO Preliminary Principles:

In other words, the authority of Elders is limited.  Elders don’t get to issue edicts to adults and punish noncompliance just because they’re Elders.  If an Elder instructs me to do something that is contrary to God’s word or unaddressed in God’s word but violates my conscience, neither God nor the BCO require me to submit to that.  The burden of proof is on the Session to show that a specific action (sending an open letter, saying I would attend a Gospel Community Group, or bringing my “Justice, not Abuse” sign to worship services) is a violation of the law of God according to Scripture in order to present it as an offense for church discipline (BCO 29-1).  None of these actions violate God’s law; they’re just inconvenient for the Session.  My conscience requires me to bring issues of injustice surrounding abuse in the church into the open and to insist they be meaningfully addressed.  I believe God has called me to do this.  I will not allow what I’ve experienced to be shoved aside and buried in bureaucracy so that church leaders can maintain power and control.

The purpose of church discipline is to address gross unrepentant sin or immorality that endangers someone’s soul.  It’s not to exert control over conscionable behavior that you don’t like, put a woman in her place for challenging you, silence someone who is speaking up about injustice, or engage in whistleblower retribution when you are being held accountable for wrongdoing.  If what I’ve said about the Session in my open letters weren’t true, the church could indict me for lying.  If I were engaged in immorality, the church could indict me for that.  But since you know perfectly well that I’m telling the truth, and am a genuine Christian acting in good conscience, the strongest thing you’ve come up with to indict me for is not “submitting” to your control.  Spinning my noncompliance as a mortal sin against Jesus Christ is a petty, frivolous power play, and this whole situation is the most shameful failure of leadership I’ve ever personally witnessed in fifteen years of vocational ministry.

Jesus Christ is my Lord, and I will obey Him.  I am a sinner and far from perfect, but my conscience is clear before God on the essential points of this matter.  There are two ways the Session can get my sign out of the Sanctuary.  The first is a sea change pertaining to abuse in the church, with abject, unequivocal public repentance for the issues I’ve raised, accompanied by churchwide abuse and domestic violence training for all leaders.  This is how the Session should have responded to this whole situation long ago.  The second is a spurious excommunication with our whole community and the wider body of Christ watching, followed by appeals all the way up to PCA General Assembly.  I’m fine either way.  If you put me on trial, it will be the proudest moment of my life thus far, in the company of my heroes, and in the company of Christ.

April 28, 2022: The following posts are the most recent posts from the same WordPress blog by Jessica Fore that was linked to in this post by Jeff Crippen, starting with Jessica Fore’s post that we added to RCF’s comment.